So, I read this blog. Every single day. Funny thing is, even though it's called "Barefoot Foodie" she doesn't post about food very often. She is more of a humorist. OK, that's an understatement. She is a friggin hilarious chick, and I want to be BFFs with her. But, back to the recipe! She posted this recipe for Mexican Casserole a while ago and I like a lot of casserole type food (aka comfort food, dorm food, home cookin...heheh) so I tried it and it was YUMMY! Her original recipe is here. 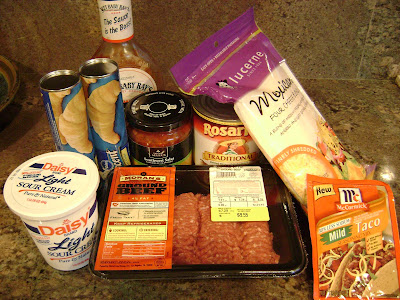 What you need (for my version!):
Optional toppings:
This has a few more steps than my usual crock pot regime, but I think I handled it pretty well. First, grease/cooking spray a large baking dish. Then unroll all the crescents and press them into the bottom of the dish, and up onto the sides a little so you have a crust all the way around.

Put the crescents in the oven at 375 degrees for about 8-10 minutes. That way it will be less doughy. Next you get started on the ground beef. Brown it and drain some of the grease. Pour in the BBQ sauce and the taco seasoning. 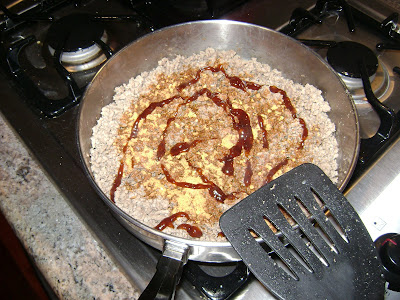 Then mix it all up and let it simmer for a few minutes. 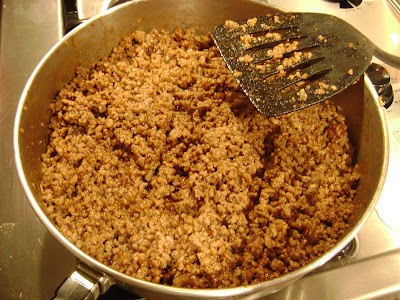 Then you begin the layering process. Spread the can of beans on top of the partially cooked crescent roll crust. The ground beef mixture goes next and then the jar of salsa, all spread to cover the whole dish. 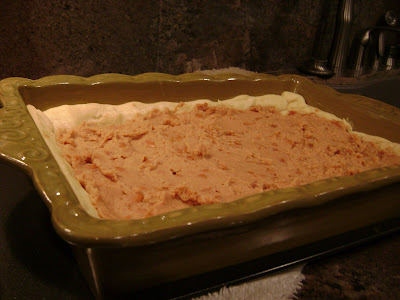 On top of the salsa you spread the sour cream, and top it all off with the shredded cheese. 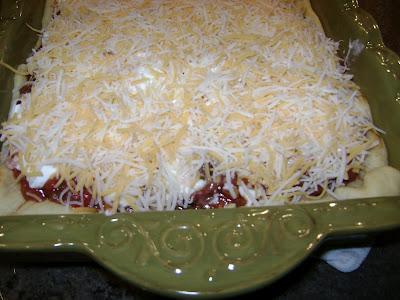 Then it goes back into the oven for about 12-15 more minutes, or until the cheese is melted and the crust looks deliciously browned. (I increased the time on both the first and second baking by a few minutes. I found the crust still wasn't crispy enough.) 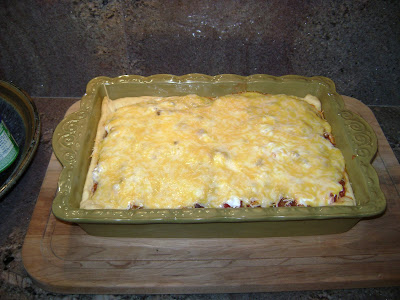 This is the final result! There was a TON of this, so it is definitely good for a big, hungry family. It's sort of like a Mexican (-American) lasagna. Yummy cheesy, meaty, melty layers. 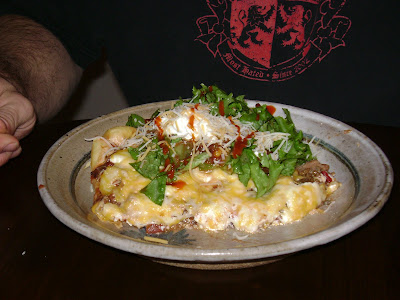 The topping options for this meal are never ending, but we went fairly traditional with some shredded lettuce, salsa, and (of course) more cheese.

Look at me, cooking up a storm! heheh My boyfriend is going to die of shock. But not before I write about everything I have cooked so there is some concrete proof that it is happening.

This was another Pinterest find. And it's NOT for the crock pot! The original recipe came from this blog, but I made a few personal changes... Behold, Chicken Enchilada Pasta! 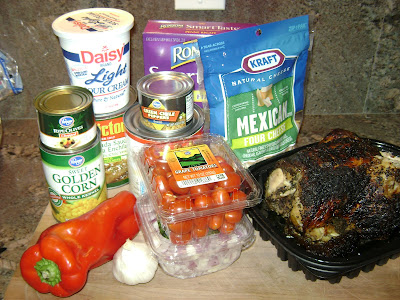 The first thing I did was chop the veggies and get the water boiling for the pasta, since my chicken was pre-cooked. Toss the red pepper, onions, and garlic into a pan of hot olive oil and saute for a few minutes. Once they are getting tender, add the chicken, enchilada sauces (red and green), green chilies, and all the spices. Stir to mix and let this simmer for about 10 minutes. 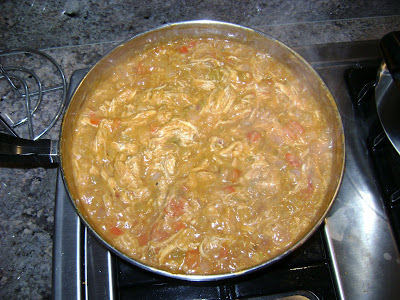 Then you add the cheese!! And stir until melted. Mmmmm, melty cheesy goodness.
In the meantime the pasta should be cooking! 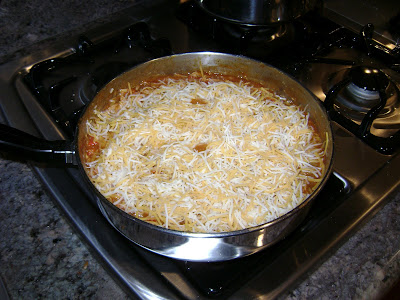 After the cheese is melted, reduce heat and add the sour cream. You DO NOT want the sour cream to come to a boil. (It could curdle. eww!! That just sounds gross and I have never had first hand experience with it.) Continue stirring until the sour cream is mixed in and the whole pan looks creamy and delicious! (Should have grabbed a pic at that point but it was smelling so yummy I just rushed to the end!) 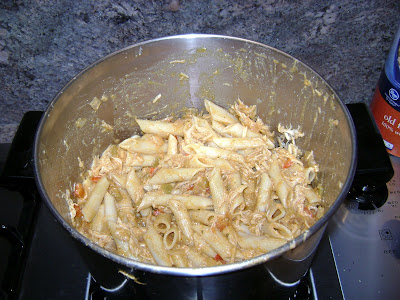 That's basically it! Drain the pasta, mix in the chicken enchilada cheese extravaganza and garnish to taste! (Another picture I missed, my boyfriends outrageously garnished plateful of food! Avocado, 3 kinds of salsa/hot sauce, extra cheese, sour cream, fresh tomatoes...etc) *Sigh* - I learn with each post. :-)

Hope you enjoy if you try this, we sure did!!

Posted by cynthia at 2:49 PM No comments:

Here is a quick summary of the other CrockPot recipes I have tried... (all found via Pinterest but links here are to the original blog posts).

Albondigas Soup! - Our favorite so far, and BY FAR! So good and actually seems pretty authentic from what we know of growing up in Southern California. The dried mint is a MUST. We get some fresh crema and "Mexican" cheese from La Tiendita and put a spoonful of each on top. At the same little store we get fresh tortillas to dip/shred into it. (I shred, he dips.) Mmmmmmmm! We have a friend whose family own a butcher shop and we used sausages we got from him to make the meatballs. They were cooked and saved overnight (but not frozen) before going into the pot. 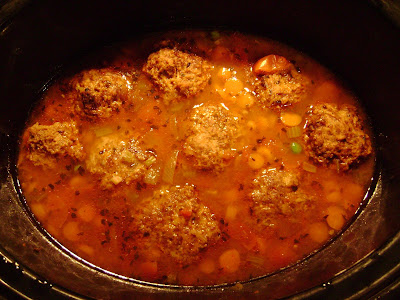 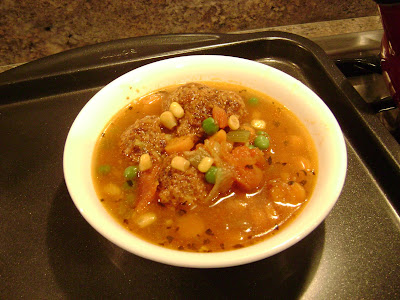 Angel Chicken - I LOVE mushrooms, so this was one of my favorites. I served it with penne pasta. Rice or mashed potatoes would probably be good, too.

BBQ Pork (and Beef) The BBQ pork tasted good but we both agreed that it was a bit too "pulled" by the time I shredded it and then it got MORE shredded when mixing the sauce in, it ended up sort of "mushy" (for lack of a better word) BUT it still tasted just fine and dandy on a bun! The BBQ beef I did from a slow cooking cook book I bought online. We thought it was better than the pork, but very similar idea. Toss it in the pot with sauce/condiments and let it sit all day!

Sweet Mustard Roast (we did this with pork) This ranks up there with albondigas, probably the second favorite. The roast was delicious. I love honey/mustardy flavors and the boyfriend... he loves meat. So...SUCCESS! I made it with these "Smashed" potatoes (I'm naming them "Smashed"...they seem to be called "Crash Potatoes" in many places), which really deserve their own post and will most likely get one in the near future. Can't get much easier than boil, smash, bake, eat!!

So far the only failure we have had was lasagna. It dried out too much and everything kind of melded together, no delicious layers of cheese, noodle, meat..just mush. I got it out of my book, not online...so I'm willing to give it another try if a better recipe pops up. I am finding that recipes often don't reference what size CrockPot they are using, and we have a big one. I think that was the problem with the lasagna.

Please let me know if I have missed anything delicious and easy!

So proud that this was featured on a weekly round up of Pinned it Made It posts at:

I requested and received a Crock Pot for Christmas. As previously mentioned, I am not much of a cook, but I am trying to get better! I figured throwing stuff in a pot and turning it on was right up my alley. So far it's been a big success! Since Christmas I have made quite a few dishes, and the majority of them were a big success.
The first attempt was a pretty basic pot roast. I got the recipe here (via Pinterest, yay Pinterest!) and it lived up to it's billing of easy and delicious. I bumped up the water a bit as well as probably used more veggies than she mentions, but I was using a large CrockPot and I didn't want it to dry out while I was at work! 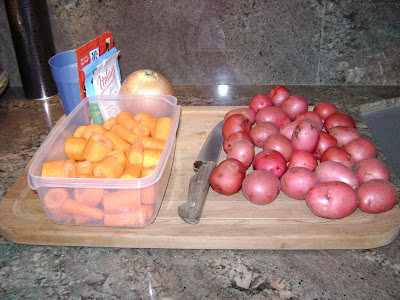 Start packing everything in, with a nice layer of veggies on bottom and the roast on top. 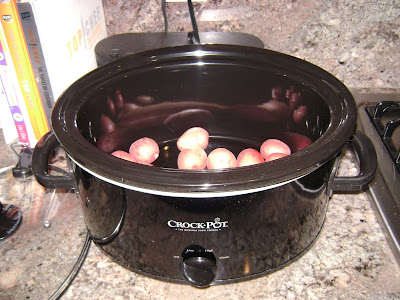 I mixed the 3 dry spice packets up into the 2 cups of water and then poured it over the top of everything. As you can see, it was pretty full when I got everything in the pot. Then you just turn it on, and head off to work! 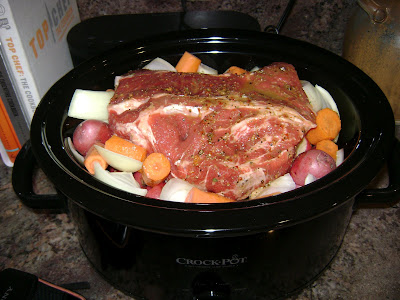 When you get home after fighting the traffic (is that only in SoCal?) you have this lovely sight (and the SMELLS!!) to greet you. 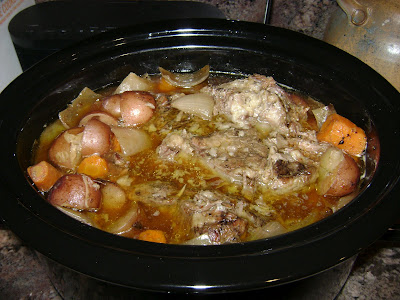 I am a big pot roast fan, so I loved this. My boyfriend and his mom both enjoyed it, too. I do think it could have had a little bit more flavor, maybe one more spice packet next time? But the meat and veggies were a great texture and the flavors were really good, if a little light. We had this 2 nights in a row for dinner the week after Christmas. Perfect winter food, even if we don't really have winter here in San Diego. I wanted to take the time to bid a fond farewell (hopefully temporarily!) to one of my favorite bloggers. 2 Girls In The World was one of the first blogs I ever got sucked into, I remember when I found it I must have ready 20 posts straight before my eyes started burning. I just adore their blog(s). They had the coolest life opportunity and they took such full and fabulous advantage of it. They are done with the crazy schedule now and settling back into "normal" life. I imagine it is bittersweet. I would be a liar if I told you I didn't get misty eyed reading this farewell post. 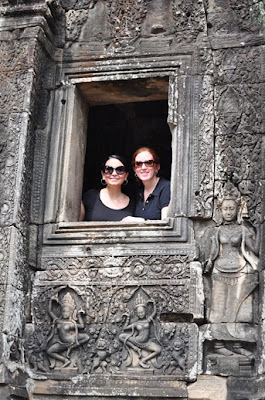 Anywhoooo....thanks ladies (especially MAV! such a sweetheart) for being so fun to follow and inspiring me to get going and keep it up. Hope you are enjoying the normalcy!! I vote for a "Life List" blog to start up sometime in the future. ;-) 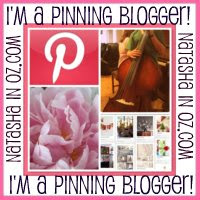 Places I Want to Go

Places I Have Been